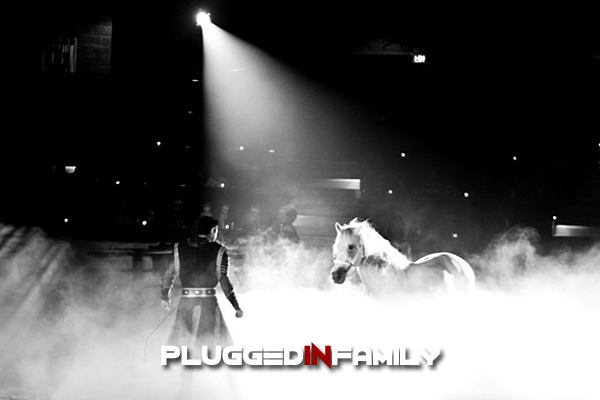 Our family visited the Forth Worth and Dallas area during the week of Thanksgiving. While we were in Texas we had the honor to attend Medieval Times Dallas Castle on Black Friday. This has been on our top things to do list for quite some time for our family. 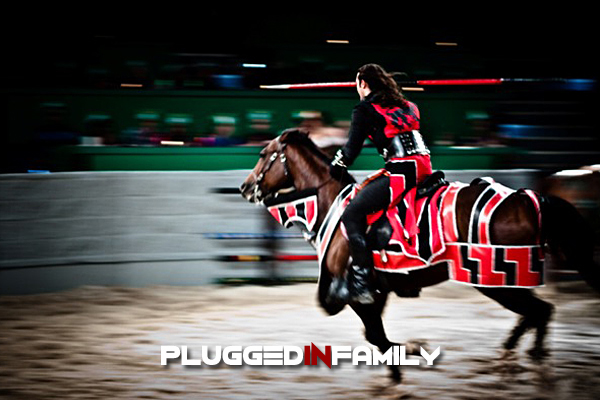 The castle is beautiful and simply eye catching as we drove up to the entrance. The oohs and aahs from my boys were the same as if we were watching fireworks. Flags flying atop the castle and the gigantic drawbridge create an environment that let us know we were in for an experience of a lifetime. 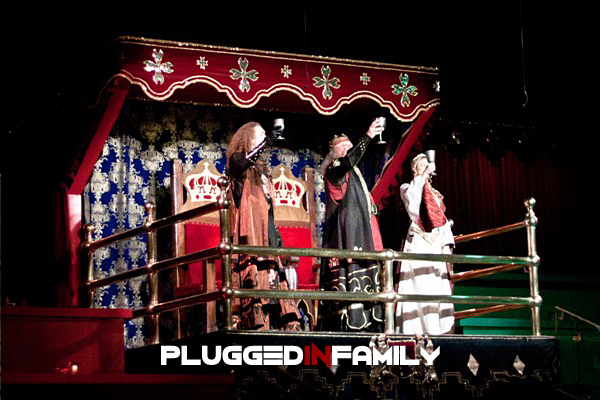 Arriving early is highly recommended. Even with the 90 minute suggested time to arrive before our scheduled time at 8:00 pm, there were already several eager families in line. Based upon the people who were at this particular show, I imagine the later show has less children than an earlier performance.

As we entered the castle, we left behind the 21st century and returned to the 11th century castle from Spain. A time of chivalry, knights, jousting, and greetings of My Lady and My Lord became the norm.

Once inside the castle we were assigned to the Red Knight’s team, complete with a crown and cheering banner for every member of our party. Red is my favorite color, so this was perfect for our family.

If your head happens to be a tad bit larger than the size of the crown, the staff might look at you a little bit funny but they now know how to assemble two crowns together for those with a larger head. The person in the family who needed this will not be revealed as my lips are sealed because I will not be telling everyone that my husband has a big head.

Then we were treated to the royal dressing. Attendants picked out our clothing and transformed us into a royal family. I loved dressing up as a queen, even if only for a moment and my sons loved holding a sword. Fortunately my normally camera shy husband joined in without asking and we had a phenomenal family picture taken in front of a red dragon. If only they sold the picture in Christmas cards, then we would be all set. 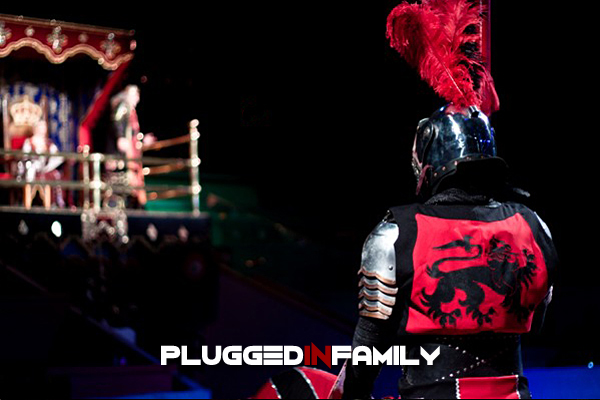 Waiting for the doors to open for seating allows for plenty of time to shop. This was the most difficult part for my boys, as they were unprepared for the abundance of items available. Guiding them in making a good choice proved difficult for us too. They wanted everything and it was easy to see why, as I agreed with them. With our help they each picked out a knight figurine and a fire breathing dragon. 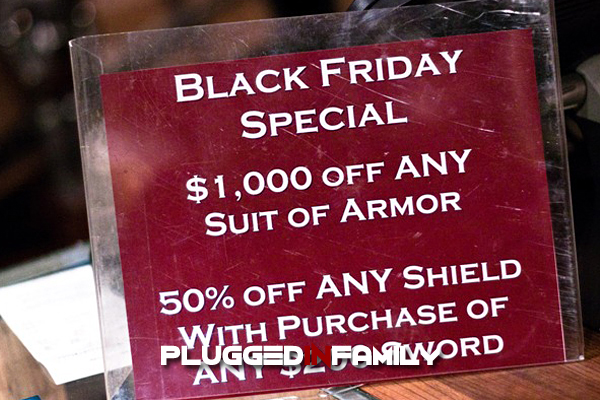 The museum tour does not have a recommended age to my knowledge but would be best for older children and adults. We were unaware of the torture items within the museum and quickly ushered the children through before my older son could read the descriptions.

The knighting ceremony is not listed as an activity on the website, but was definitely the highlight of our visit. On the night we attended, my sons were the only ones to be knighted and we opted to have them knighted together. When the King arrived, my children’s names were called. They were given royal robes and kneeled before the King where he used his sword and said “Once” upon my older son’s shoulder, “Twice” upon my younger son’s shoulder, and “Thrice” in the middle of their heads. The souvenir photo is included in the package and captured the joy of their Knighthood. My husband made the joke that since they went through Jedi training academy at Disneyland that now they were Jedi Knights.

During the show the King and Princess announce people who are celebrating special events. Many were celebrating a birthday or an anniversary. This would even be a memorable place to propose and truly make your bride-to-be feel like a princess for a royal engagement. Since the boys were knighted their names were called out and said that they were celebrating being Jedi Knights. Several in the audience laughed. 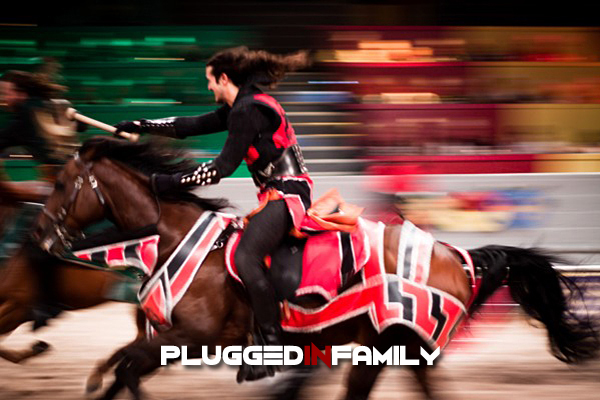 The four-course meal fit for a king was spectacular and was served by our very own Wench. With the royal tradition of silverware not being used in this time period, we ate with our hands. The funny part was that the menu was listed on the napkin and my 8 year old was selecting what he would like to eat. His eyes grew big when he found out he did not have to choose and would receive everything on the menu.  I was worried my children would not eat since they do not like to have messy hands, but much to my amazement they truly enjoyed the food. The large, warm wet cloth was a wonderful way to finish off the meal and should be sold by the case in the gift shop.

Any seat will give an excellent view, but I highly recommend the front row. Feeling the power of the horse barreling down inches from the seat provides quite a rush, perfect for little boys or even just for their mother. The fight scenes also allow you to feel as though you are in the thick of the battle. 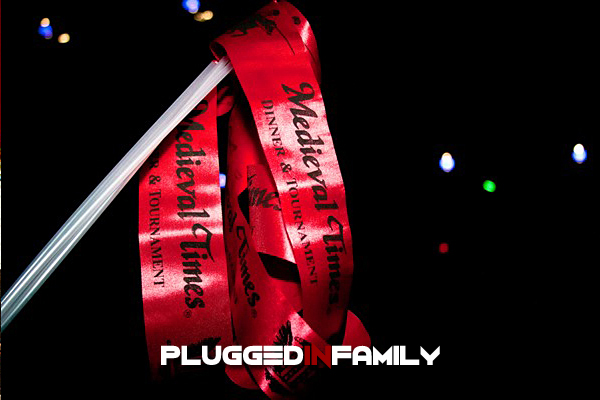 Buying a banner for your knight is optional but I am so glad we did. Not only was it a larger banner to wave, but after the show the boys were able to get the signature of all of the knights, the princess, and the king.  It was then that I noticed all of the long hair of the knights. My youngest son has never had his hair cut and fits nicely into this time period. Based upon his hair length he will grow up to be a knight or a football player. 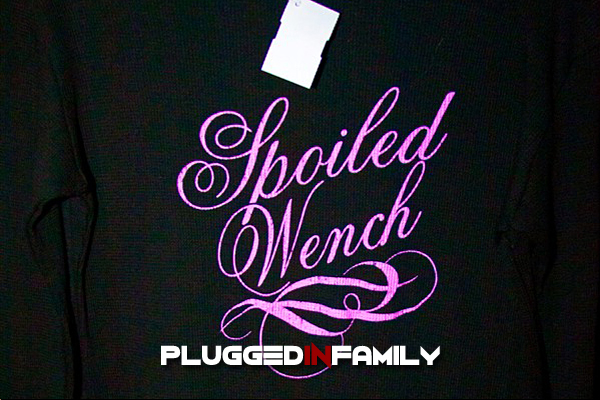 The King presides over the festivities and the dialogue helps tell the story. The music is recorded in Kiev, Ukraine and is timed perfectly to the actions of the horses and the Knights, creating drama that helps draw in the audience.

The brand new show was simply spectacular and debuted a week ago. The white horse, known as Liberty Horse, is stunning and all the horses are very well trained, even when there is not a rider on them. It is not very often that I put my camera down to sit back and just enjoy the festivities but that is exactly what I did part way through the evening.

The Falconer poses for pictures as you enter the castle, but I thought that was all he did. During the show he emerged and released his falcon fly through the entire arena, set to music. During the falcon’s flight my husband was humorous as he covered his bowl with his hands to protect his food.

By far, the Knights of the Realm were the star of the show. The nets were lowered as the jousting began, which protected us from the shattered wood flying everywhere. They must go through several thousand lances each year to produce such a spectacular show. 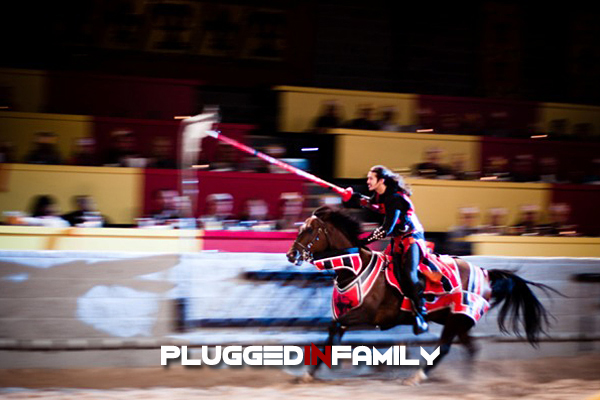 The loud noises from the bola as they hit the shields were exciting and resulted in my boys cheering for our knight. Sparks from the swords added excitement and an element of danger, as we realized the weapons were real. The Red Knight fought valiantly but alas his fate will not be revealed.

My aunt and uncle lived in the Dallas area for over 20 years but this was their first time attending Medieval Times. My aunt raved about the food and the thoughtfulness of the moist cloths afterward. My uncle surprised me by wearing the crown over his baseball cap the entire night. On the drive home I heard them talking about going again to celebrate their anniversary. It might have something to do with the Red Knight throwing a flower to her during the show. 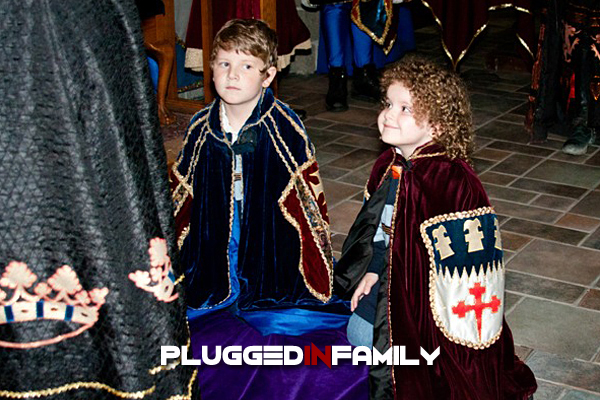 As a homeschooling family, it is important for us to have hands on learning that extends far beyond textbooks. The entire experience really brought this time period to life for my children and is truly a lesson they will treasure within their hearts. There are not too many places where you can see pure Spanish horses, Quarter horses, Friesians, and Monorcan from the Mediterranean dressed appropriately for the time period. This is one lapbook that will be requested by the boys as soon as we return home from our vacation.

Medieval Times in Dallas, Texas is the perfect place to create family memories that will last a lifetime. From the moment you arrive you are transported back in time to an adventure that will keep you on the edge of your seat as you cheer on your knight. One time is truly never enough to experience the dinner and tournament. Now all they need to do is build one in Arizona!

2 thoughts on “A Knight to Remember at Medieval Times in Dallas, Texas”