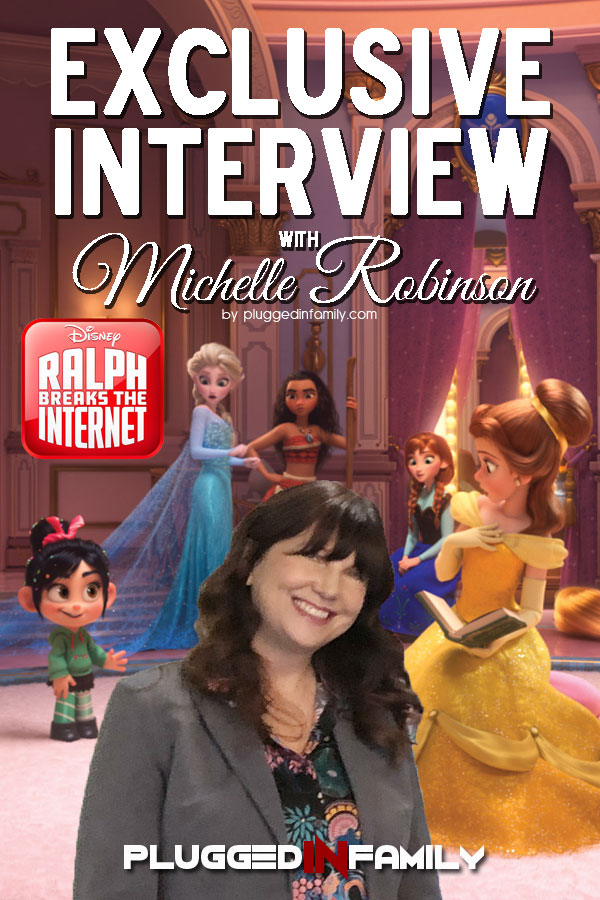 Michelle Robinson sat down with us for an exclusive interview with the upcoming release of Ralph Breaks the Internet. Ms. Robinson is the Character Look Development Supervisor on Ralph Breaks the Internet with Walt Disney Animation Studios. As a member of the Walt Disney Animation Studios team for 25 years, she has an obvious love for all things Disney. Read below for our full interview or watch the video to enjoy hearing about her love for Disney and what makes her job magical.

Our interview was one on one and included Plugged In Kids too. As you can imagine bringing a 15 year old boy and a 12 year old boy to a Disney interview was exciting for them and they made sure to ask their own questions. At the conclusion of the interview she even took time to take a photograph with us. Thank you to Leigh from Fingerpaint for taking our photo. 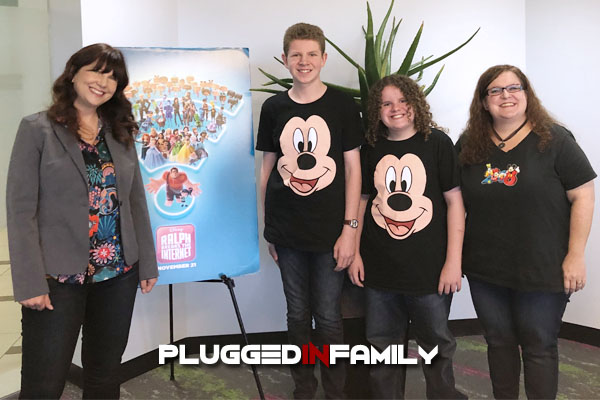 Below is the screenshot of her name in the credits from the Wreck-It Ralph movie. In Ralph Breaks the Internet her name appears much earlier in the credits since she is the Character Look Development Supervisor for this movie.

PLUGGED IN FAMILY: What are your favorite Disney movies you worked on?

MICHELLE ROBINSON: My favorite Disney movies I worked on would be definitely the first Wreck-It Ralph and Zootopia was a big favorite. I’ve always loved the animal movies, all of those growing up, Bambi and Lady and the Tramp and so to get a chance to work on an all animal movie was great.

PIF: What is your favorite job at Disney?

MR: My favorite job at Disney right now as a Supervisor is mentoring and working with the team. Like that part of the job is really fantastic and it’s the part of my job where I get to go and look at people’s work and be surprised by what they do. We’re always kind of looking for the artist to contribute and bring their own sort of creative energies to the work and I’m amazed every day at the stuff that I see.

PIF: With the passing of Stan Lee yesterday, Marvel and Disney suffered a tremendous loss. During the screening we caught a glimpse of a character who looks like Stan Lee. Is Stan Lee is Ralph Breaks the Internet? (NOTE: Stan Lee died on November 12, 2018 and this interview was conducted the day after Stan Lee died.)

MR: Yes, Stan Lee makes a little cameo and it is especially poignant right now because of the loss.

PIF: Did Stan Lee know he was an animated character in this movie?

MR: I actually don’t know the answer to that. I don’t know if he did or not.

PIF: You have been with Walt Disney Animation Studios for 25 years. That is amazing, by the way. Who is your favorite character you brought to life in the Wreck-It Ralph movies?

MR: I brought to life Vanellope on the very first Wreck-It Ralph. She was my baby and I got to work on her hair and put the little candy sprinkles in there and work on her little hoodie. All of those elements were so much fun and I always liked her spunk and her attitude and her energy so she is definitely my favorite character.

PIF: This is the first time we have seen all the Disney Princesses in one movie, that we are aware of. Is this correct?

MR: Yes, this is definitely the first time we’ve brought all the Princesses together.

PIF: Ralph and Vanellope live in a video game. Are you a gamer?

MR: (Laughs) I am. I play Pokémon Go. (Deep Laugh) I’m part of whole bunch of hard core Pokémon Go players at the studio. We have a couple of gyms in the building and a whole bunch of Poke Stops on the studio lot and so we get together for raids and the whole thing.

PIF: What was it like bringing video games and characters of our childhood to life?

MR: You know that was really fun. I think the studio in general has a lot of gamers, a lot of fans of gaming culture and so you know everyone has their own particular kind of favorite characters whether it is Bowser or Sonic or whoever that they’re all proud of being able to work on and sort of bring to life in a Disney movie. It’s great.

PIF: You have a special connection to the Valley of the Sun. What do you like to do here in Arizona?

PIF: What is your favorite ride at Disneyland or California Adventure?

MR: My favorite ride at Disneyland is Space Mountain. I always make time to get on that one every time I go. (Laughs) I just love it.

PIF: What brought you to Walt Disney Animation Studios?

MR: I thought I was going to be an architect. I was growing up studying architecture and then at some point it didn’t feel right so I moved into computer graphics and I was about halfway through a graduate program in computer graphics when I saw Beauty and the Beast in the theatre and there’s that ballroom sequence that was all done with CGI and that was kind of the moment when I thought you know maybe this could be a career for me. Maybe this is actually something I could do and it was just like one year later when I applied for a spot at Disney and got in and got a chance to work on Pocahontas, which is the first CG element that I worked on at Disney.

Video of Interview with Michelle Robinson

If you prefer, you can watch our interview with Michelle Robinson below or on our YouTube channel.

Thank you to Michelle Robinson for taking the time to speak with us and sharing about your work and love for Disney. You definitely helped Ralph Break the Internet! 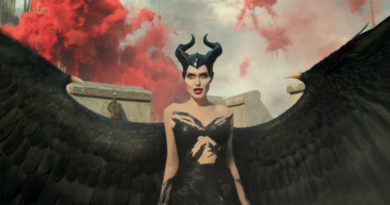 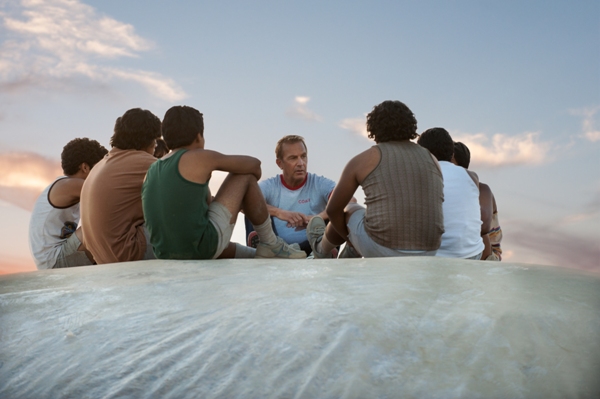