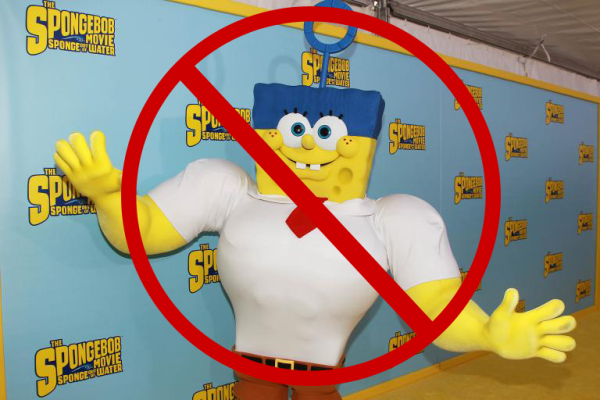 I hate SpongeBob SquarePants. There. I said it.

Just in case you were not clear on the matter:

Judge me if you will, but it sure feels so much better to just publicly admit it.

Perhaps it was the pregnancy hormones from my second child surging through my body when I sat down with my toddler to introduce both of us to a new children’s show.

One will never know what exactly it was when we sat on the floor, eyes looking upward together in sweet anticipation of enjoying something new only to have the horror show before me fill the room with the most awful theme song ever heard in my life. Nails on a chalkboard sounded like choruses of sweet angels compared to this.

What came next is a fuzzy memory. Everything happened in slow motion as hands were shoved over my toddler’s ears and then moved to my ears as a frantic search to find the remote began in a futile attempt to erase from memory what was just heard.

Before the SpongeBob Squarepants theme song was finished, it was over. At least in our house.

No SpongeBob WhateverHisPants are for this family.

Never again in my house, but then visiting relatives one Thanksgiving meant the only show that was even remotely kid friendly was SpongeBob. Their faces were so sad when their screen time was reduced to zero merely because he was on our list of unacceptable shows for children. Realizing we were in a very different situation at a relative’s house, the only logical choice was to allow them to watch the show with one stipulation.

All my wisdom from years of parenting two boys to that moment could be summed up in one sentence.

“SpongeBob is only allowed to be watched in Texas.”

If there was ever an award for the most ingenious words ever to come out of a mother’s mouth I would win that trophy in a heartbeat because the boys thought I earned Mother of the Year in that moment. Why? We live in Arizona. Texas is a two days drive away and if they remotely ever had the chance to watch it again, I had two days to prepare for it.

The boys savored those glorious moments and bathed in all the loudness and whatever else the show offered tucked as far away from me as possible.

They were happy and then we came home to Arizona, the land free of SpongeBob shows. Any toys my boys received that had the horrible yellow creature or any of his friends were given away to others to enjoy. It was their choice, not mine, but clearly became more difficult when a Patrick toy was involved. That is my husband’s name and they thought having a toy with their dad’s name was pretty cool until they realized which show it was from. Into the yard sale box it would go. Again, their choice.

So imagine my surprise when an invitation arrived in my email inviting our family to attend the media screening of the new SpongeBob movie. A movie that was not even on my radar. One I never would have paid money to see. One that was of absolutely no interest to me. Yet here it was. An invitation to see the movie and hopefully write a SpongeBob movie review.

Faced with a moral dilemma of seeing a movie I have absolutely no interest in seeing, I asked my husband to take my place. He laughed until he saw how serious I was. Then we asked the boys. Normally they are so excited to see a new movie and jump at the chance. When asked if they would like to see the movie we were met with silence. They thought about it carefully and then the eight year old said “I would like to see the movie…once.” So this is how a SpongeBob hater ended up going to see a movie premiere for a movie she has absolutely no interest in seeing. At least there is popcorn.

Before the movie premiere began face painting was offered and naturally one of the choices was SpongeBob. Thankfully there were other options. One swashbuckling face painted boy later and adorned with leis we were ready for our adventure at sea. As ready as I would ever be, I suppose.

As the movie theatre lights dimmed, with my teeth clenched tightly behind the smile on my face I leaned in close to my husband and whispered these sweet words in his ear.

2 thoughts on “I hate SpongeBob SquarePants”