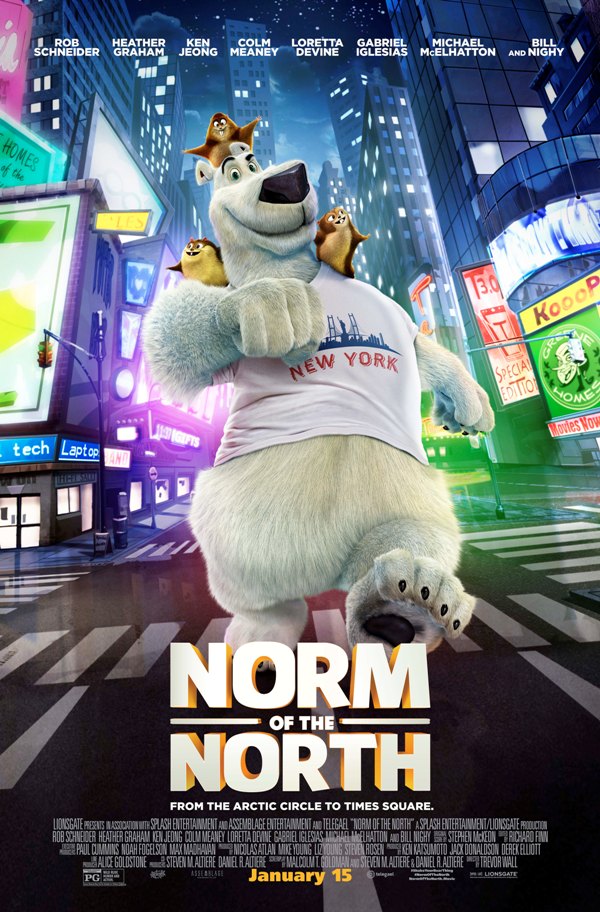 Norm of the North movie centers around the story of a polar bear who goes to New York in an effort to save the Arctic from a greedy land developer. Norm is a lovable and cute character but the story line is just too miserable to watch for anyone over the age of eight years old. Although our family was invited to attend an advanced screening in order to write this movie review, my children asked to not do their typical video review of this movie because they just didn’t like it and did not know what to say about it.

The lemmings are the cutest part of the movie, but are a sad knock off of minions. There are only three of them and even though there are a few hilarious parts it is not enough to carry the movie across the finish line or even enough to label it a comedy.

If you end up nodding off in the movie, which many adults probably will do, don’t worry about missing the story line because there isn’t much to miss. Thankfully the not so subtle attempt to introduce saving the planet to children doesn’t go as politically far as Happy Feet went but is still over the top and leaves you wanting to pick better movies for children instead of inspiring you to save the planet.

While Norm of the North had a few bits of humor, a cute polar bear, and good artwork it was not enough to save the audience and is instead a movie better suited to go straight to DVD or Redbox.

If you have children under the age of eight years old, they will probably enjoy the entire movie although you could save yourself a lot of money by just watching Frozen at home for the umpteenth million time.

Norm announces he came out of the closet, which is a poor line directed totally at the adults and is offensive to many.

Norm is shot by a tranquilizer gun and the greedy developer’s goal is to kill Norm. The lemmings pee in the fish tank and as far as movies go, this one does not have anything too objectionable in it for most parents other than a movie that is a sad knockoff of many other movies combined.

Norm of the North is rated PG for mild rude humor and action.

[quote]A polar bear of many words, Norm’s greatest gripe is simple: there is no room for tourists in the Arctic. But when a maniacal developer threatens to build luxury condos in his own backyard, Norm does what all normal polar bears would do…he heads to New York City to stop it. With a cast of ragtag lemmings at his side, Norm takes on the big apple, big business and a big identity crisis to save the day.[/quote]