Embracing the inner geek publicly is a new trend for Patrick.

Patrick is Chief Nerd ICON at Plugged In Family but is better known as The Infinity Dad.

He is a huge fan of Disney, Star Wars, Marvel, and LEGO long before it was cool.

If he could go back in time and tell his seven year old self how cool it would be when you grow up, he would be thrilled to know that as an adult he spends time hanging around with Darth Vader, Stormtroopers, and all the awesomely good guys in Star Wars.

Raising his sons to be geeks while still giving back to the community is important to their family.

He is a member of the 501st Legion donating his time for charities when not busy with his wife’s crazy adventures.

Find Patrick on his own blog called The Infinity Dad. You can also learn more about him through his portfolio. 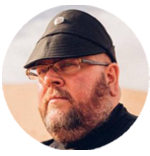