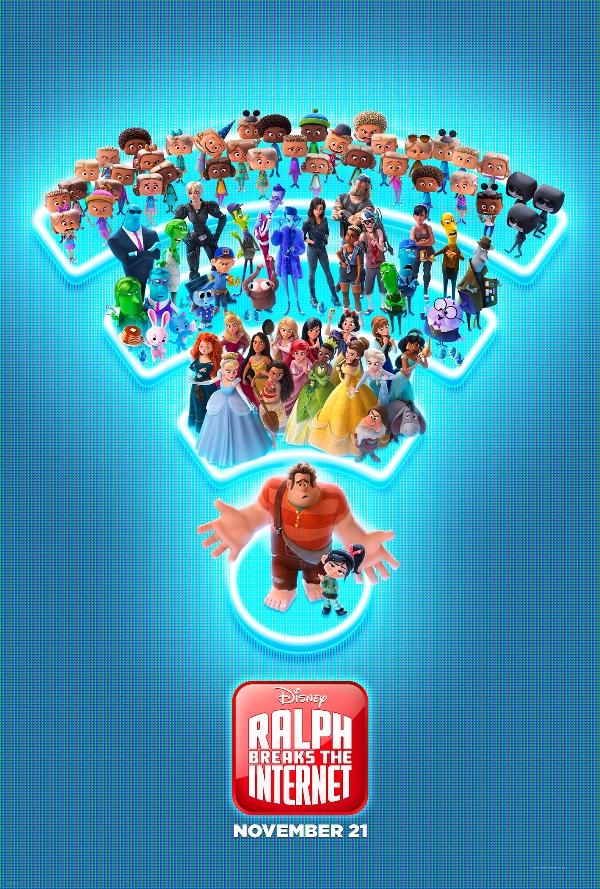 Six years after Wreck-It Ralph made it to the big screen, Ralph and Vanellope are back at it again in Ralph Breaks the Internet. The unlikely duo returns to the familiar arcade in a comedy filled with adventure and action the entire family will enjoy. During these last six years their friendship has grown and they are best friends who do everything together.

Our first glimpse of the world returns us to the arcade where all is right with the world. Customers are happy playing the familiar video games, Ralph is happy, and so are all of the arcade characters but something is wrong with Vanellope. She has spent the last six year racing every track, discovering every curve, and knows every possible route to take. Frankly, she is bored of the same thing every day. Ralph, on the other hand, is completely content living his life doing the same thing every day. In order to cheer up Vanellope, Ralph decides to create a new race track. Vanellope absolutely loves the new race track but the gamer controlling the game loses control of her steering wheel and fights to get Vanellope back onto the track. The physical struggle between the gamer and Vanellope causes the steering wheel to break. Anyone who has watched the first movie knows that a broken video game will leave every character homeless, as the game is taken out of commission.

Ralph feels terrible and has no idea how to fix it until one of the gamers talks about finding a steering wheel on Ebay for sale. There is only one available and the price is pretty high. No matter what happens Ralph is determined to get Vanellope’s game a new steering wheel so Sugar Rush is not sent to the video game graveyard.

“Ladies and gentlemen, I give you the internet!” – Vanellope von Schweetz

What ensues is a hilarious adventure as Ralph and Vanellope explore the unknown world of the internet in search of some weird company called Ebay to buy the steering wheel. Of course Ralph does not pronounce it correctly. They enter the internet for the first time and, of course, complete chaos ensues. Much of the movie is focused on their search which is quite a wild ride filled with new faces.

A tremendous problem they face is how to pay for the new steering wheel. Having no knowledge that things cost money, they must find a way to raise the funds before the item disappears. How far would you go to help a friend?

Vanellope ends up discovering a new race track called Slaughter Race and feels like her cramped world in Sugar Rush has been completely opened up, offering no race tracks as the player is free to drive anywhere. Ralph does not understand Vanellope’s new game or desires and this puts them at odds with each other, driving Ralph even further in his effort to get her the new steering wheel so they can both go home.

John C. Reilly, seen in Guardians of the Galaxy, returns as the voice of Wreck-It Ralph and continues to be such a joy to see his character on screen. He truly brings out Ralph’s character and we can only hope this is not the last we have seen of Wreck-It Ralph. More movies are definitely needed.

Sarah Silverman also returns to add her voice to Vanellope. Vanellope is my favorite character in the entire first movie and still continues to be in this movie also. She has such an attitude of determination that gives strength and hope to little girls.

Gal Gadot, who many remember played Wonder Woman, voices the character Shank from Slaughter Race and delivers an outstanding performance. We hope to see her voice more characters in the future. Shank is a no-nonsense character whose tough as nails approach appeals to Vanellope, drawing her further into the Slaughter Race game.

There are some hilarious moments in this movie. Adults will catch quite a bit of the humor but not all children will catch the laughter inducing moments.

Since Vanellope is technically a princess in her video game, Sugar Rush, that makes her a Disney princess. When she happens to walk into a room filled with all of the Disney Princesses she is overwhelmed. You have seen a portion of this encounter if you watched the preview. She meets Cinderella, Belle, Snow White, Merida, Tiana, Aurora, Ariel, Mulan, Jasmine, Moana, Pocahontas, Rapunzel, Elsa, and Anna.

This is the first time all of the Disney Princesses have been in one movie, let alone all in one room. Disney does a fantastic job making fun of itself and the absurd things a princess does in some of their movies, yet Disney turns all those moments on their head and gives you something new to think about in a humorous way. 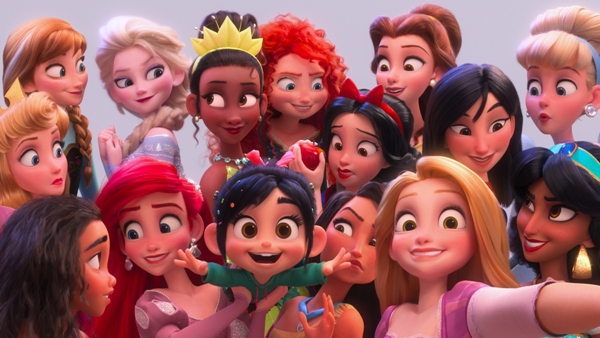 Fans of Star Wars will love the addition of a few iconic characters, which have the feel of Star Wars Rebels in the design of the characters. We only wish there were a few more scenes, but we are at least grateful they were included.

You will see even less Marvel characters than Star Wars but they are a welcomed addition to the movie. One character, in particular, has absolutely no lines and if you blink you may miss him. If you do happen to catch a glimpse you will totally see Disney’s love and adoration for this character. We want to say more but it may potentially spoil it.

These are not the only characters you will see. There are quite a few glimpses and additions that really make this movie feel like it is a toy box filled with Disney characters.

Felix and Calhoun return. Last time we saw them was at the altar. They have been married for six years and when Sugar Rush breaks there are many racers who do not have a home. Since they already wanted to be parents they decide to adopt 15 tweens. All at the same time. Talk about chaos, but what they learn is invaluable. Be sure to pay attention to Felix and Calhoun as they give us the expert advice that will help all parents, once and for all. You do not want to miss that moment.

As you know, not all movies geared toward kids are worth watching, but this movie is definitely worth it and one that adults will also enjoy. Even if you do not have kids, adults will absolutely laugh and feel good about spending time watching this movie. Our family is looking forward to seeing it again very soon. This one is worthy to add to our home movie collection.

This awesome family movie is both hilarious and endearing as we discover the true test of friendship and what lengths friends will go to in order to protect their best friend.

Be sure to check out our exclusive interview with Michelle Robinson, Character Look Development Supervisor on Ralph Breaks the Internet, to learn more about this family movie, just in time for Thanksgiving.

While this movie is rated PG, most parents will not find anything objectionable in this movie. We certainly did not, as everything was framed in a humorous way.

There are several scenes of characters drinking in the video game Tapper. Disney changed the drink to root beer to be family friendly.

There are two bonus scenes. One plays after the initial credits roll and is absolutely hilarious. The second one is after all the credits, where you can see information about an upcoming Disney movie.

Wreck-It Ralph is the original movie but you do not have to see it first in order to enjoy this movie. Of course it will help give more meaning to the movie but is not required before watching the sequel.

Ralph Breaks the Internet is rated PG for some action and rude humor.

Be sure to watch the movie review by our Plugged In Kids below. Watch to the end to see the outtakes. They just might brighten your day.

“Video-game bad guy Ralph (voice of John C. Reilly) and best friend Vanellope (voice of Sarah Silverman) leave the comforts of Litwak’s arcade in an attempt to save her game. Their quest takes them to the vast world of the internet, a world Vanellope wholeheartedly embraces—so much so that Ralph worries he may lose the only friend he’s ever had.”