Meet our Teen Contributor, known simply as A Future TK.

He is the son of our Head Geek and Chief Nerd ICON.

A Future TK is a member of The Galactic Academy. In a few years, when he turns 18 years old he will join the 501st Legion as a Stormtrooper, hence the name.

He is an active cosplayer with multiple costumes. His favorites are his Stormtrooper costume he debuted at Star Wars Celebration and Han Solo.

One of the highlights of his young life was escorting the umpires onto the field at the Arizona Diamondback Star Wars Night. He has been interviewed by Lucasfilm and appears in videos created by Star Wars, SeaLife Arizona, and has also appeared on local news stations.

When not at Comicon he is found reading, playing video games, creating with LEGO bricks, or giving back to his community at charity events. 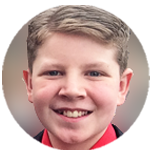