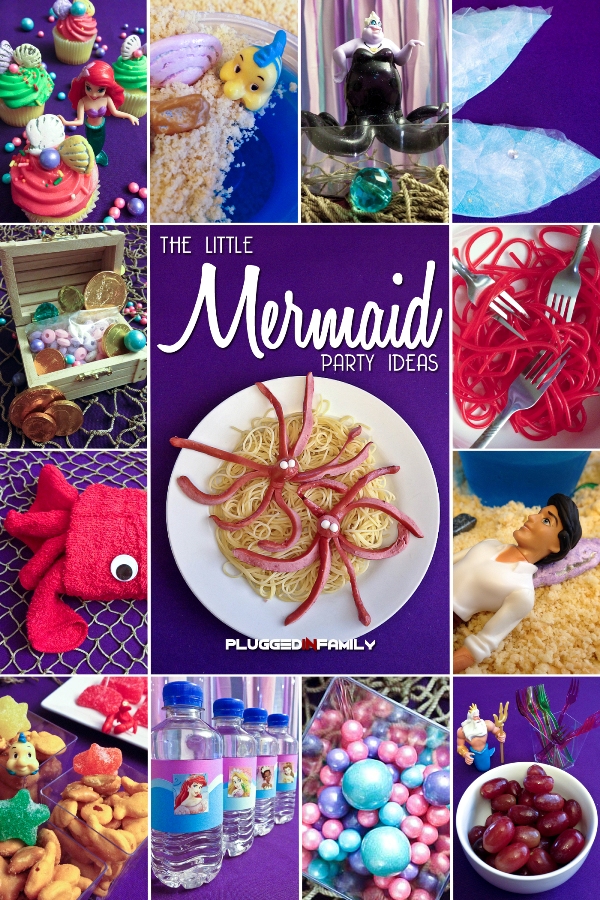 Go under the sea with these The Little Mermaid party ideas to celebrate the princess in all of us.

One of the newest rides at Disneyland for our family to enjoy is The Little Mermaid where we go under the sea but when we cannot be at Disneyland, it is so fun to bring Disney home and for the first time ever we had a princess party.

When I was little I dreamed of having a little girl of my own one day but here I am all these years later as a mom of two boys just itching to celebrate a little girl. What to do? Well, the next best thing is to “borrow” a great friend’s daughter and celebrate her birthday.

It was just a little family celebration with four children but they had a great time. Everything was inspired by new toys out for The Little Mermaid. The boys picked out the Disney Princess Kiss the Girl Scene Play Set with Prince Eric and Ariel in the boat ride. My seven year old liked to do his best Sebastian impression while singing “Kiss the Girl” during the party.

Use Disney characters to inspire dishes for the party

For The Little Mermaid party, finding the set with all of the characters from the movie inspired dishes and treats for our birthday celebration fit for a princess.

Making the backdrop for the party can be done with three simple tools and I cannot wait to share how I made my own. It help set the under the sea tone for the party.

One of the cutest scenes from The Little Mermaid is Ariel combing her hair with a dinglehopper. Buying inexpensive forks and turning them into dinglehoppers is easy. Simple hand the fork to your husband, ask him to make it not quite look like a fork. With a pair of pliers and muscle, the truly funky looking forks placed in with the pull and peel Twizzlers to look like Ariel’s hair brought smiles out from the kids. All they had to do was figure out how to get a piece out to eat it.

Fetching the Stick with Max and Prince Eric

Pretzel sticks look just like a stick to throw for a dog so these were simple and easy.

A cup of blue JELL-O makes for the perfect water environment for Flounder. Simply take vanilla cookies and crush them into tiny pieces to look like sand. Cover half of the top of the container and adorn with decorations. Chocolate sea shells or chocolate rocks are a great choice, along with candy pearls.

Folding towels into the shape of a crab to resemble Sebastian is fairly easy but our challenge was to make him with just washcloths. All it took was four washcloths and pair of googly eyes to make Sebastian come to life in a big way.

Each child received a treasure box and inside was a Disney Princess candy necklace to make at home. When the party was over, each child received the candy decorations used for the party. They picked out five pieces they liked and placed it inside their treasure chest. We went through multiple rounds until all of the candy was inside the treasure boxes and neatly tucked away to enjoy another day. My boys are looking forward to painting their boxes soon.

The water bottles were easy to personalize with a different Disney Princess sticker so the children could keep track of which drink was theirs.

Creating Ariel’s tail out of rose petals was the perfect centerpiece for the party table.

Ursula perched herself high atop a glass jar of sea water to watch over the party. She fit perfectly over the top of it and adding a little bit of a net and a jewel from the sea finished the look.

The most surprising hit of the night was practicing with the trident, what King Triton holds in his hand. The tiny forks look just like King Triton’s spear. Each child could practice using their spear in a bowl of grapes to see if they could capture a grape. If your child does not like fruit, perhaps this trick would work. They only had once chance each and then had to get back in line and did it over and over again. They were cute to watch their faces and delight.

We had an amazing time enjoying our princess party birthday ideas featuring The Little Mermaid with princess cupcakes and I am so thankful I had the chance to enjoy creating a birthday party for a girl at least once in my life.

One thought on “The Little Mermaid Party Ideas”