He is the son of our Head Geek and Chief Nerd ICON.

Mickey Fett is the most recognized member of the entire family. He has never had a hair cut and has naturally curly long hair.

He is an active cosplayer with multiple costumes. His favorites are his Mickey Fett, Biker Scout, Anakin Skywalker, and Star-Lord.

Since his mother cannot give him a stage to perform on every day, she created a YouTube channel so he could have a bigger audience. Give him a microphone and he will happily attract an audience, which he has done from the moment he could talk.

Mickey Fett is a member of The Galactic Academy. In a few years, when he turns 18 years old he will join the 501st Legion as a Biker Scout. He is also a member of the Madalorian Mashups group.

When not at Comicon he is found reading, playing video games, creating with LEGO bricks, or giving back to his community at charity events. 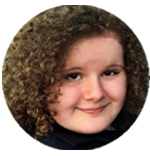