Fall in love with Aladdin again with this breathtakingly beautiful remake. 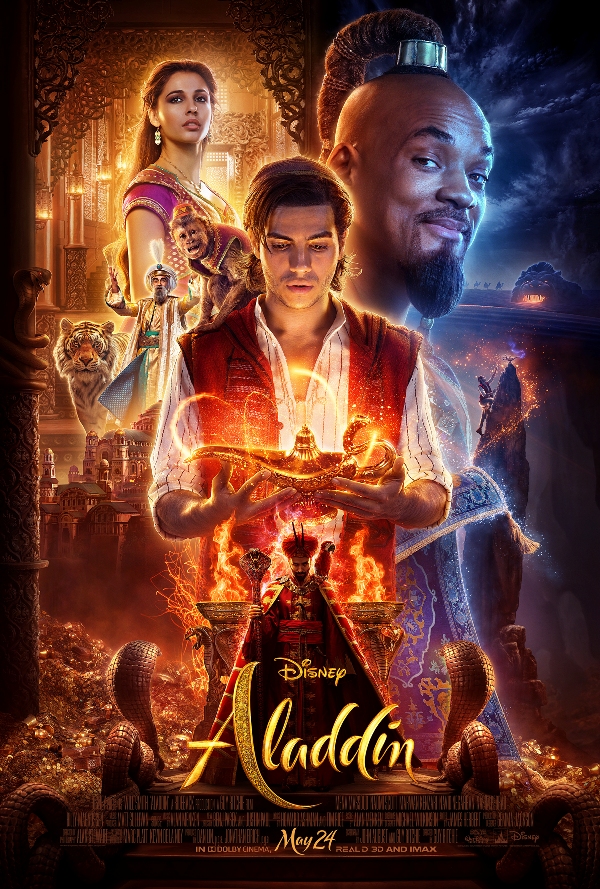 Thank you to Walt Disney Studios for the invitation to the advanced media screening to facilitate our Aladdin movie review.

The live action Aladdin 2019 movie is a breathtakingly beautiful remake of the beloved Disney classic cartoon that delights and entertains both children and their parents.

While this movie has a different opening than the cartoon, those familiar with the story will recognize the nearly identical storyline. Disney does what they do best by taking something so familiar and making it seem new. The iconic music returns but we are also treated to new music that makes a perfect fit.

If you have seen the Aladdin cartoon, watched a Disney on Ice performance, or had the opportunity to enjoy the live performance at California Adventure in the Hyperion Theatre then the storyline is very familiar to you. There are some subtle differences and additions that enhance the story but it is essentially the same. 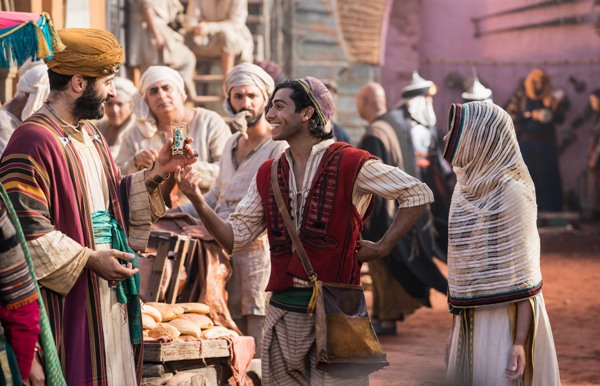 Aladdin is a street rat in the city of Agrabah where he runs into the Princess who is at the market for the first time and is disguised as a commoner. Aladdin saves her and she returns to a life behind the palace walls where trusted advisor Jafar is gaining control over Princess’s Jasmine’s father, the Sultan, in an attempt to be the most powerful person in the room. 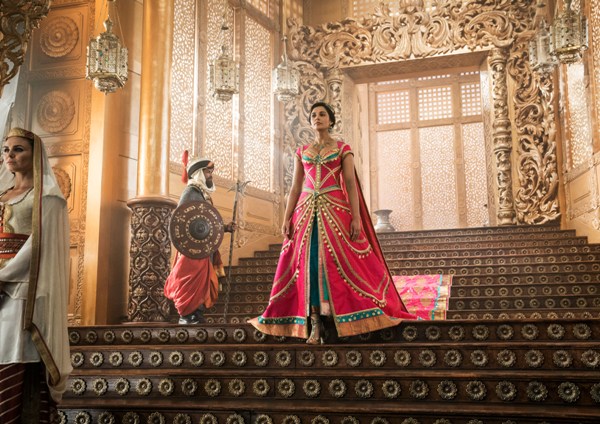 Jasmine is required to marry a prince and is not impressed by anyone who tries to request her hand in marriage. Jafar discovers the diamond in the rough, Aladdin, and takes him to the Cave of Wonders in order for Aladdin to retrieve the magic lamp. Jafar ultimately fails and the lamp remains in the hands of Aladdin who discovers what power it holds when he rubs the lamp and Genie appears to grant three wishes.

According to the rules of wish granting you cannot bring someone back from the dead, make someone fall in love with you, or ask for more wishes. There are gray areas, which Genie discovers after he helps Aladdin with his first wish, to become a Prince, so he can court Princess Jasmine. A grand entrance fit for a Prince, even a fake one, ensues and the magic makes everyone see him not as the street rat but as a Prince. Aladdin still has two wishes remaining. 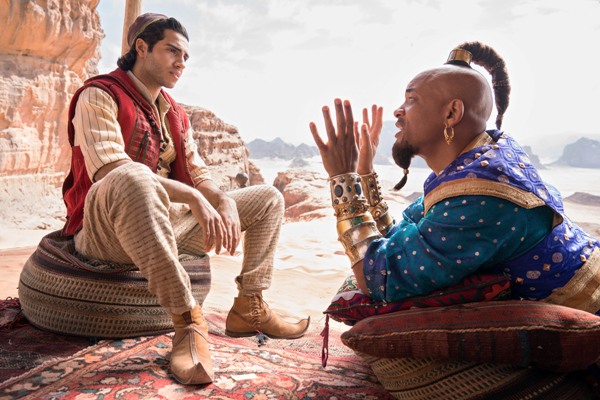 The question everyone wants to know is does the 2019 version stand up to the cartoon and do the characters deliver a memorable performance? Undoubtedly, yes.

When Disney announced they were remaking this movie this was honestly not on our list of movies to see. Some classics need to be left alone, especially with the comedic genius of Robin Williams who forever changed the way animation was executed; however Disney far exceeds expectations with a brilliant cast and beautiful animation turning this familiar story into something new.

This is your classic cartoon refreshed for a whole new generation to enjoy. 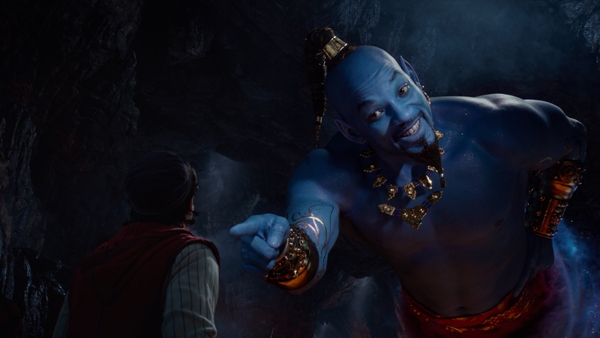 Will Smith plays Genie and frankly it was difficult to even imagine him as this character. It is a role only Robin Williams can fill so one must imagine this was a challenging role for Smith to undertake. The careful balance of honoring the amazing performance of Williams, yet taking the character and making it into something familiar yet new was beautiful to watch. 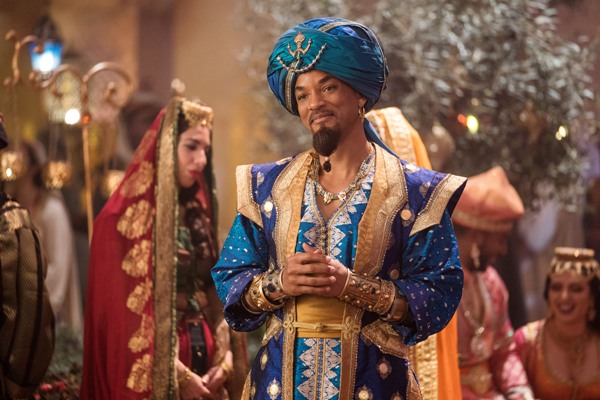 If you are a die hard Robin Williams fan who cannot imagine anyone else filling the role of Genie then it may be hard for you to watch…at first. Once you get past the idea of Will Smith singing something besides rap, which might take until the end of the first song, you will quickly enjoy the journey of watching a new Genie fulfilling wishes. Smith does not do the exact lines or comedic timing that Williams excelled at but Smith turns Genie into a lovable character who still makes you laugh, in just a different way. As an expert shape shifter he takes multiple forms in the movie. While we can never know what Williams would have thought about Smith’s performance we can only hope he would have laughed and loved it too.

Alan Tudyk returns to another Disney movie voicing another animal. This time it is Iago. Alan Tudyk is quickly becoming to Disney what John Ratzenberger is to Pixar. Tudyk’s vocalization provides quite a bit of humor and plenty of laughs for being such an annoying parrot. 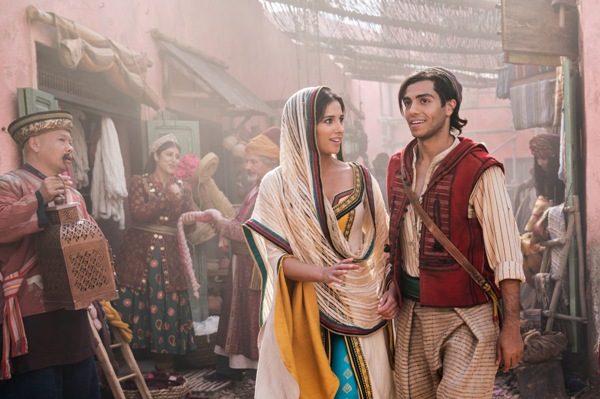 Aladdin and Jasmine are played by Mena Massoud and Naomi Scott. The magic of these two characters as cartoons is brought forth onto the big screen with a believable performance in both acting and singing.

Although the storyline is followed pretty closely, Jasmine does ultimately change into a more strong and self-sufficient woman who does not need rescuing. The modern approach to this princess is welcome as little girls and boys will take notice of her self-confidence and her strength, ultimately sending the message that even a princess can change her destiny. 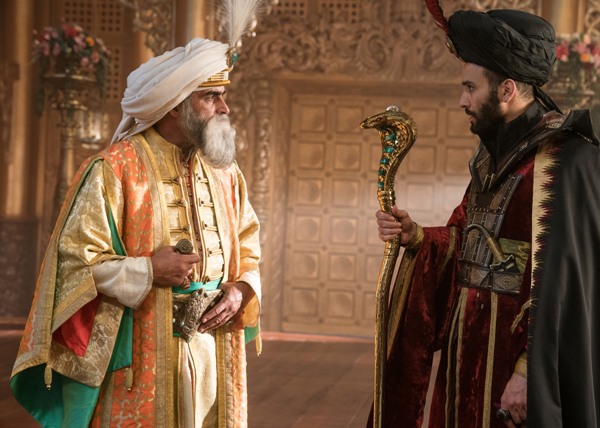 The only character that was less than believable was Jafar, played by Marwan Kenzari. He did not come across as a big and powerful wizard. He seemed like your next door neighbor who just so happens to have some raging evil thoughts inside and wants to become the most powerful person in the room. Perhaps they tried to normalize him so the wickedness was not so obvious to everyone but he was definitely not the Jafar we were expecting. Still, toward the end of the movie he definitely brought out his inner evilness to become a horrible and raging Jafar. For a man seeking power he definitely brought his character to life toward the end of the movie.

The carpet is the one character with no voice, yet provides a starring role. The magic carpet is done beautifully and steals the scenes, as only a magical carpet can do.

The mischevious Abu, based upon a Capuchin monkey, is Aladdin’s trusted friend and was entirely digital in this movie. Rajah, the tiger, was also entirely digital and both of these characters, along with the rest of the animals were so life-like just like Disney did in the Jungle Book live action remake.

While this remake of a beloved classic could have gone horribly wrong, Disney absolutely knew what they were doing and brought their animation and storytelling skills to a refreshingly new level that will make you fall in love with Aladdin all over again. It’s a whole new world.

Aladdin 2019 is a movie we look forward to adding to our home movie collection when it is released on Blu-ray. 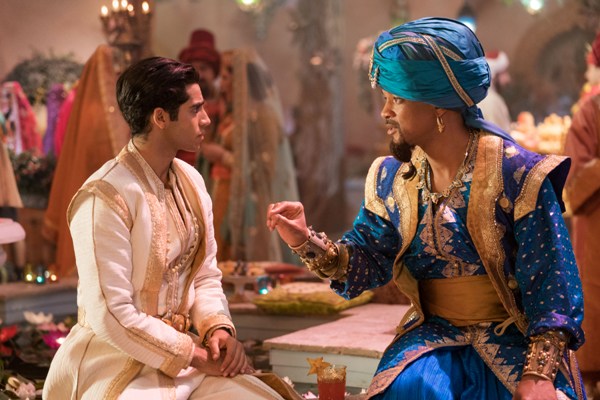 This is a great family friendly movie that we believe all ages will enjoy. It is a fast paced story that will help keep the attention of younger children.

Aladdin is rated PG for some action/peril.

[quote]A thrilling and vibrant live-action adaptation of Disney’s animated classic, “Aladdin” is the exciting tale of the charming street rat Aladdin, the courageous and self-determined Princess Jasmine and the Genie who may be the key to their future.[/quote] 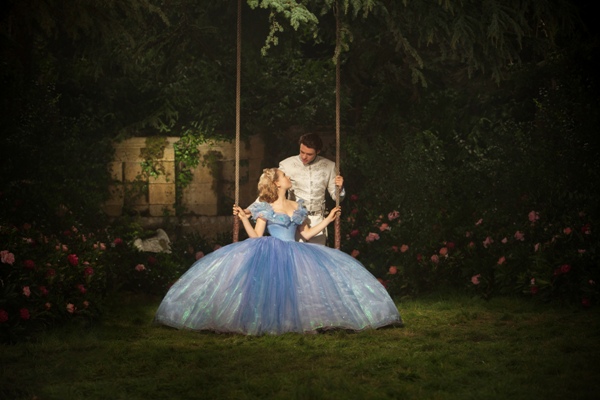 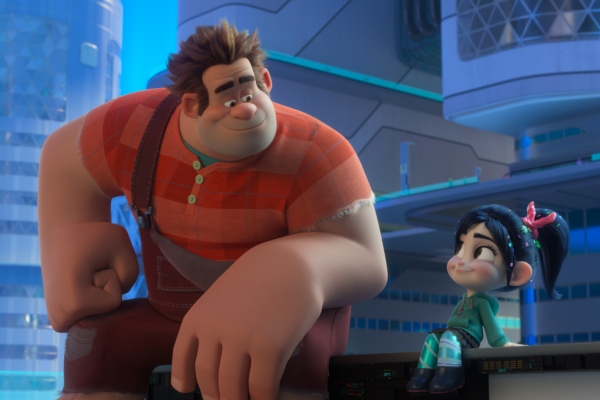 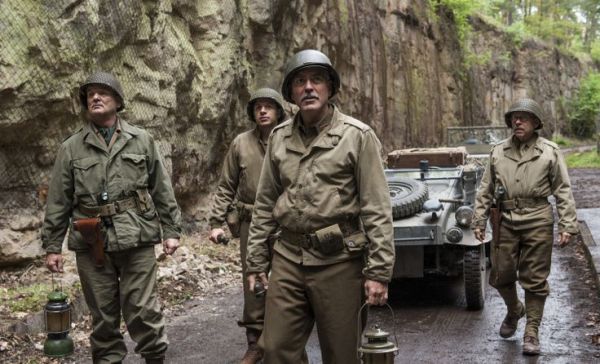 The Monuments Men Sacrifice for Art