This post is sponsored by the Drone Racing League. 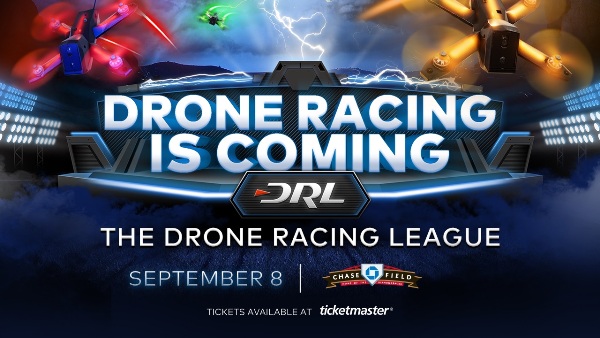 [quote]DRL races combine the thrill of star wars pod-racing with the real world adrenaline of Formula 1 to create The Sport of the Future.[/quote]

The biggest live race ever allows fans to get an up-close view while also broadcasting the event this fall to more than 75 countries on the leading sports programs, including NBC and Twitter.

Join the DRL live in Phoenix, Arizona at Chase Field in downtown Phoenix where the Arizona Diamondbacks play. Purchase your tickets at Ticketmaster with the discount code DRL50.

Plan to come early to the event, as the doors open two hours before the event begins. Fans can enjoy an exclusive pre-show of DRL’s new Artificial Intelligence Robotic Racing (AIRR) Circuit. Brightly lit tracks will showcase the first ever autonomous racing drones competition. In addition, immersive FPV flying experiences will also be available for fans that come to the event early.

12 elite drone pilots battle it out

Once the event begins, fans will enjoy watching 12 elite drone pilots battle it out to see who will win. Will your favorite pilot take home the coveted DRL Allianz World Championship? Join the event live to find out which one wins.

Doors open at 5:30 pm, two hours prior to the event begin time. All fans must enter on the west side of the building by 4th Street and Jackson Street. All seats will be behind protective netting.

Racing speeds reach over 90 MPH, ensuring a thrilling sporting event experience. This is one event you do not want to miss. Check out Drone Racing League’s event in Phoenix on September 8 or catch it on NBC and Twitter.